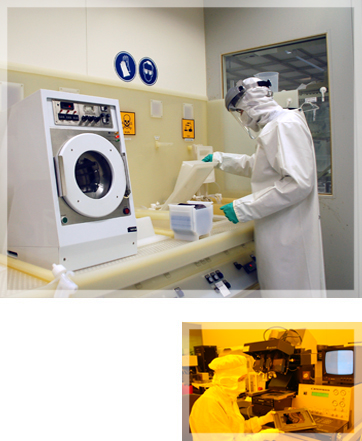 We have been involved in MEMS micromachining since 2001. The micromachining of MEMS includes the selective etching of silicon and deposited thin films to form three dimensional mechanical structures such as cantilevers, diaphragms, and channels. We have expertise in both, surface micromachining and bulk micromachining:

This technique involves the building up of layers on the surface of the substrate, utilizing low stress films – e.g. oxide and nitride – while etching out a sacrificial layer such as amorphous silicon.

This technique involves etching away the bulk of the silicon wafer to create the desired microstructures. The etching of the silicon occurs by using either an isotropic dry etch method (DRIE) or an anisotropic wet etch method. In this regard we use the in house spray coating method in combination with a projection alignment procedure.